I Should Know Better

Well, Wednesday night, technically.  I went to the gym. Yay me!  30 minutes on the elliptical and 10 minute walk around the track.  Was feeling pretty good about myself. 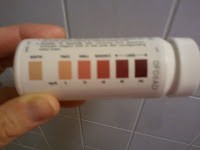 Get home. Check bg and it's 193.  A little high, so I take the correction suggested on my pump.  And you know what, my stomach kind of hurts.  I've had some trace and small ketones after working out the last few times.

So I go check, and that stick turns an ugly shade of purple.  PURPLE? SERIOUSLY?

Large ketones?  Umm, I couldn't tell you the last time I had large ketones!

By this point, I have the urge to both vomit and cry.  Ugh!

Thankfully, before this I had hopped on Twitter to ask other PWD's about post-exercise ketones.  This was before I knew they were large, however.  Now, I hopped back on, totally freaking out.  Typing like mad whilst chugging water at a superhuman rate (which is exactly what I felt like doing since I wanted to vomit--NOT).  And yes, I was sure my set was fine because I was coming down.

DOC to the rescue!  Oh, I also had a total meltdown and called my mom at 10:30 at night balling my eyes out.  Sorry mom.  And thanks.

So, thanks to my mom and some great friends, I was able to figure out the most likely cause of my ketones.

Flashback to Wednesday afternoon.  At work, I pigged out on some food I probably shouldn't have eaten.  This resulted in a SWAGfail (though I was still in the low 200s).  So I wasn't hungry later that evening.  Idiot moment number one: I went and worked out without eating anything.  Sigh.  Yes, I really did that.

Idiot moment number two: haven't been drinking much water lately.  Didn't take any to the gym either, so I'm sure I was dehydrated.  Yes, I really did that too.

Ergo the large ketones.  So even with the urge to vomit, I choke down a Luna bar, followed by more water.  And wouldn't you know, the ketones were gone within the hour.

I'm generally not a big fan of the generic tan color, but boy was I happy to see it on that ketone stick!  Whew!  Was ready to call the endo on call at the hospital, but relieved I didn't have to.
So lesson learned.  I will make a point to drink more water (especially on workout days) and will never go to the gym without eating again!

So big thanks to my mom, who always makes me feel better.  And thanks to all my Twitter friends, especially Scott, Abby, Scott, Dana, and Ashley.  Thanks for helping me calm down and figure this out.  And for not judging me since I should know better.
Posted by Jess at 8:33 AM