I like words.  There aren't a lot of times where you're going to find me without something to say.

But after reading this book, it's taken me a while to get my thoughts together. 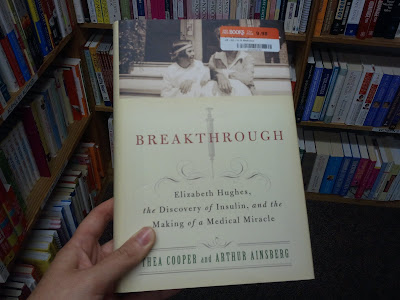 Breakthrough has been on my list to read, so when I found it at Half Price Books, I couldn't pass it up.  I knew what the book was about: the discovery of insulin.  What I didn't expect was how emotionally impacted I was by the story.

I may never look at a bottle of insulin the same way again.

Now the book itself isn't the best I've ever read.  Nowhere close.  It's as if the authors couldn't decide what kind of book they wanted to write, a history report or a novel.  The book was rather choppy because it kept switching back and forth between the two.  Breakthrough does have two authors, so maybe one wrote the historical pieces and the other wrote the novel pieces?  I don't know, but it keeps the book from flowing very well.

It took a good bit to get into the story, but I'm glad I stuck with it.  One thing that makes it slow is all the superfluous information.  I found myself skipping over a good bit of the historical info, simply because it wasn't really needed for the story to make sense.  I think the book could be much improved by cutting some of it out.

There's a very thorough review of the history of World War I.  I mean, I love history, but I didn't get the book for that reason.  I want to know about the story of insulin.  That's what the book is supposed to be about.

Breakthrough centers around two people: Dr. Frederick Banting, and Elizabeth Hughes, one of Banting's first patients.  Elizabeth's father, Charles Evans Hughes, is an important historical figure, serving both at Secretary of State during Wilson's presidency and on the Supreme Court.  Much time and attention is given to Hughes, in excruciating detail.  Again, much of the information seems superfluous.  He was an important figure in history, and as such, could afford to take the best care of Elizabeth that was available at the time.

Having said all that, I would still highly recommend the book.  As tedious as some of it is, and as many liberties as I'm sure the authors took in the more novelish parts, it's still worth the read.  Most definitely.

As a said, I was not expecting the emotional reaction to the story that I had.  One thing the book does is make it easier to imagine what my life would have been like if I'd been diagnosed 100 years ago rather than 18.

I would have died.  It's as simple as that.

If my family had been wealthy enough to put me in the care of Dr. Allen, I might have lived several years after my diagnosis.  His patients were put on strict limited diets with the intention of keeping them alive as long as possible on as little food as possible.  Under his plan. Elizabeth lived for nearly four years after her diagnosis.  FOUR YEARS.  Wow.  Just wow.

A parent was faced with the decision to either follow a plan like Dr. Allen's or let their child eat normally and die sooner.  It was a death sentence either way.  What was a parent to do?

Another thing that surprised me was the number of dogs who died during Banting and Best's research.  It's very sad.  I love dogs.  A lot.  And I cried after the section describing what some of those wonderful animals went through.  I know it wasn't their choice, but I appreciate their sacrifice.

Also, even after insulin was discovered and they started producing it, thousands of diabetics still died waiting for it.   There simply wasn't enough to give to everyone who needed it.  To be that close to the treatment and not able to get it must have been so heartbreaking.

And the pictures in the book.  Oh my, the pictures of children, before and after receiving insulin.  I cried looking at those. I still can't get them out of my head.

This whole process has been quite emotional for me.  The were several nights over the course of reading the book where I had trouble sleeping.  Couldn't keep my brain from spinning.  From thinking about how different my life could have been.

How many millions of people with diabetes died before insulin was discovered and became widely available?  How many still die today because they don't have access to insulin or can't afford it?  Heartbreaking. (Sidebar: check out the International Diabetes Federation for ways you can help get insulin to children who need it).

I may never look at a bottle of insulin the same way again.  Even on days like today, when my blood sugar is not cooperating AT ALL, I am still alive.

I owe my life to Banting, Best, and all the others involved in discovering insulin.  And thanks to the authors of Breakthrough, I have a better understanding of just what that means.