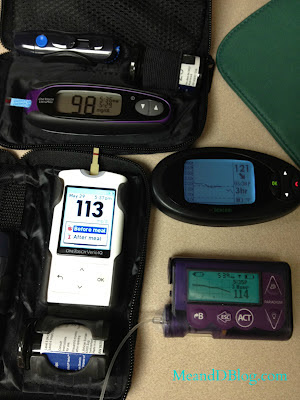 So I'm carrying a few extra devices for the next few days.

I've been badly wanting a VerioIQ meter ever since it was released.  And my amazingly fantastic kick-ass CDE was able to get me one.  SWEET!  (My health insurance is incredible, but doesn't pay for meters. And this one's expensive.)

It does seems to run higher than my Ultra Mini, so that will be interesting.  I'll keep you posted.

In addition to picking up the Verio meter at my endo's office yesterday morning, I began a trial of the Dexcom system.

Why am I doing a trial of the Dexcom, you ask?  Well, because I never have.  I'm happy with my Medtronic CGM.  I love it, I really do.  But I also want to know what all my options are.

I would also like to share that wearing two different CGM systems at the same time is hazardous to your health.  Despite the lovely numbers in that snapshot, I can say with confidence that having two high alarms going off at the same time is more than slightly infuriating.  So I'll keep comparing the two CGM systems until my Medtronic sensor dies later today, and then I'll just have the Dexcom going.  For the sake of my sanity.

I'll let you know what I think when the trial is over.  Meanwhile, I'm having fun playing with my new toys.

To see some other posts about the VerioIQ, check out these from Stacey, Kim, and Kerri.

Email ThisBlogThis!Share to TwitterShare to FacebookShare to Pinterest
Labels: CGM, diabetes supplies, my CDE is awesome