My eyes snap open out of a deep sleep.  My Dexcom is buzz, buzz, buzz, buzzing away.  It rattles in the glass coaster on my nightstand, which thankfully makes it louder.

I know the instant my eyes open that I'm low.  A quick finger stick confirms this. 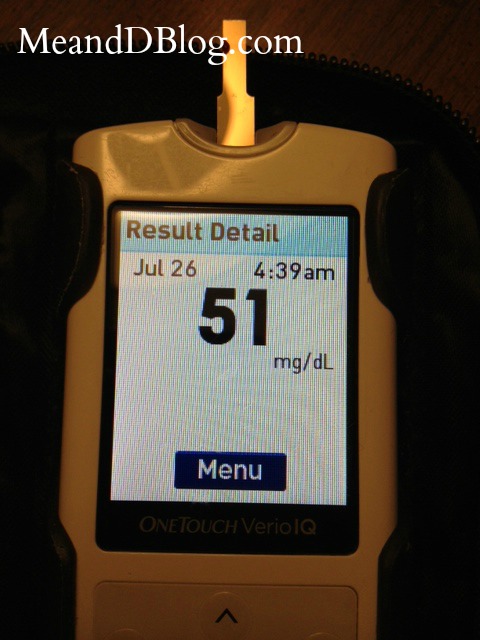 A juice box and granola bar later, I'm on the way up.  But I double check before going back to sleep. 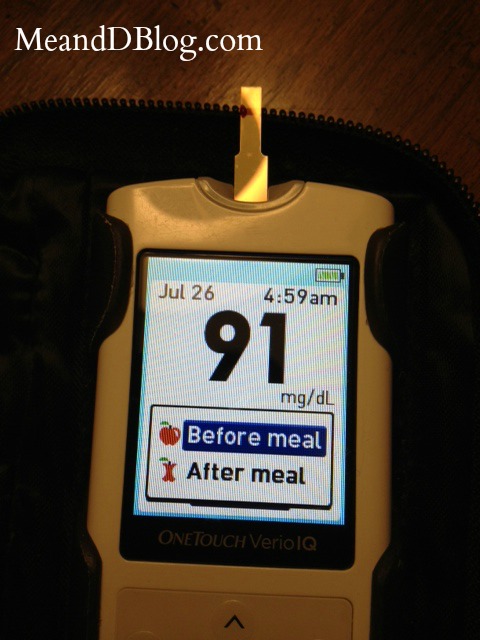 Today, I am especially thankful for my cgm.  Who knows if I would have woken up otherwise? 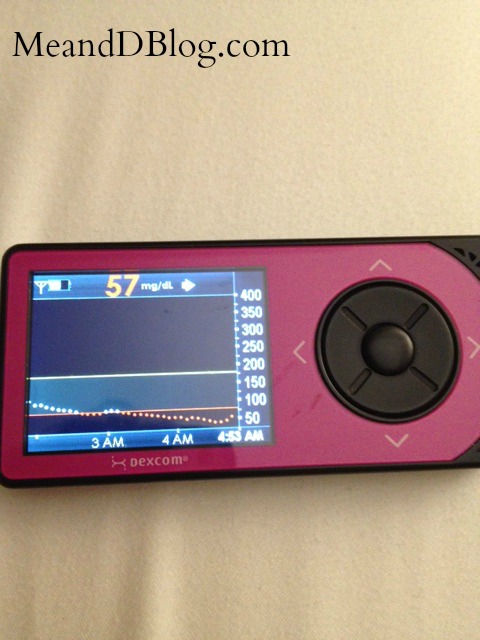 I hate lows during the night.

Subtitle of this post: No, I am NOT pregnant.

"So, when are you guys going to start having kids?"

Josh and I get this question ALL THE TIME!  I hate that question.  Personally, I think it's rude, insensitive, and none of your damn business.  But we're at the age where a lot of friends/coworkers/acquaintances are having kids.  So people ask.

Our usual answer?  Not anytime soon.

We're not willing to say we won't ever have kids, but that's definitely not what's right for us right now.  Maybe we'll change our minds in a few years.  Maybe we won't.  Time will tell.  Good grief, I'm not THAT old yet.

The only good thing about people asking this question?  An opportunity to educate, whether I want to or not.  If the people asking know I have Type 1, they often assume that means I can't have kids.  So the question turns into a chance to set the record straight.

Diabetes has absolutely NOTHING to do with my lack of desire for a child.  I really just don't want any kids right now.  That's it, I promise.

Jacquie, Holly, Karen, Renza, Amy, Bethany, Kerri, Emma, Kim, Cherise, Jennifer, Sarah, Jenn, Melissa, Gina, Christel, Jennifer, Shannon, Lisa.  And those are just the ladies I could think of off the top of my head!  There are many, many more.

So if we decide we are ready for kids, I'll know that I can do it.  Thanks to all the amazing women who have.

But for now, I'm good being an observer.

No Way There'd Be Another


After all the diabetes in the wild encounters on our DC trip, I didn't expect to have any more for a while.  But I was wrong.

A couple weeks ago, I was on a field trip with my class.  Across the room, something caught my eye.  The unmistakable sight of a pump set on the arm of a little girl.  It was a Sure-T or Contact Detach, with the two adhesive circles, making it even easier to spot.  As my students were fully engaged in their activities, I worked my way over towards the little girl.  She was with another girl, and a woman I assumed to be mom was snapping pictures.

Since it worked so well before, I said, "I spy a pump set!"  The girl looked up at me and smiled.  "I have a pump too!" I said.  I was wearing a dress with my pump hidden in my bra, and my set wasn't visible.  Of course.

I turned to the woman with the camera: "What kind of pump does she have?"

"I'm not sure," she said apologetically.  "I'm her aunt.  She's been diabetic since she was two."

I rejoined the other teacher on the trip with me, and told her about what had just happened.  And things went back to normal.  Or so I thought.

A little bit later, I saw an adorable little girl toddling around.  Around her waist, was a sparkly pink thing that looked an awfully lot like a pump pack.  But no, it couldn't be.  I'd already had one diabetes run-in on this trip.  No way there'd be another.  But as she toddled by again with her dad, I saw pump tubing sticking out the side of the sparkly pink pack.  I couldn't believe it!  That made three PWDs in one rather small space.

As I stood there watching, trying to decide if/what to say, her dad looked my direction and smiled.  I took it as a sign.  "Is that an insulin pump?" I asked, before I could chicken out.

Sure enough, it was.  And dad was perfectly willing to chat.  Turned out that sweet little girl was only diagnosed about six weeks ago.  And she's already pumping?  Dad explained that it was because she needs such tiny amounts of insulin that dosing by syringe was nearly impossible.

I was able to supervise my class quite well from where we were standing, so dad and I chatted for quite a while.  It was a conversation I won't soon forget.  Before leaving, I gave the dad my email address, and suggested he check out some blogs, especially those of D moms and dads.  I don't know if I'll ever hear from him, but I'm so glad we met.  He and his precious daughter were truly a joy.

This happened during the week of FFL.  I was pretty bummed about not being there.  But meeting those two little girls reminded me again that I am never alone.  It was like my own personal FFL in the midst of a workday.  Happy in my heart and soul.

Email ThisBlogThis!Share to TwitterShare to FacebookShare to Pinterest
Labels: diabetes in the wild

Sometimes when I change my set, it doesn't hurt at all.  Sometimes, it hurts like a sumbitch.

I just changed it a few minutes ago.  Any guesses as to how that went?  Yep.  OW!  So now what?  Do I wait and see if the pain goes away?  Wait and see if the set works, risking that it won't?  I hate to waste a set, but there's something else I hate more: a failed set.

This happened to me last week as well. A holy-crap-that-smarts insertion.  And I decided to wait and see.  The result of that endeavor?  Blood sugars in the upper 300s.  No thank you.

Tonight, I ripped that set right back out.  Thankfully on my second insertion of the night, I didn't feel a thing.  Time to cross my fingers that it works, and move on. 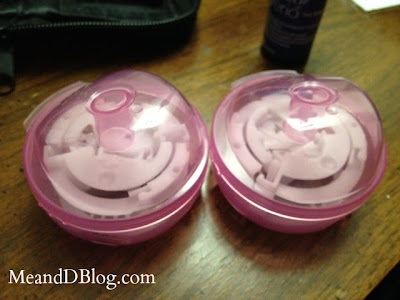 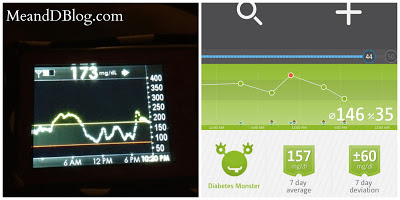 And honestly, I'd be ok with diabetes looking like this most days. 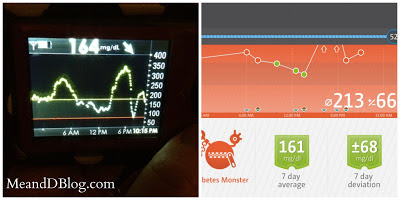 We dust ourselves off and move on.  Thankfully, tomorrow is a new day.  We can do this.

*The screen captures on the right are from the mySugr app.  I'm a fan.  I was not asked to blog about the app, nor am I connected with it in any way, other than personal use.  As always, all thoughts and opinions are my own.*


As a teenager, I was afraid I'd never have a boyfriend because of my diabetes.  How I wish I could go back to that insecure girl and assure her that everything was going to be ok.

Josh knew about my diabetes before we started dating.  And he never hesitated.

Sunday was our sixth wedding anniversary.  If you read this blog, then you know I'm kind of a hot mess.  Through diabetes, binge eating, depression, and anxiety, Josh's support and faith in me has never wavered.  And there simply aren't enough words to explain what that means to me. 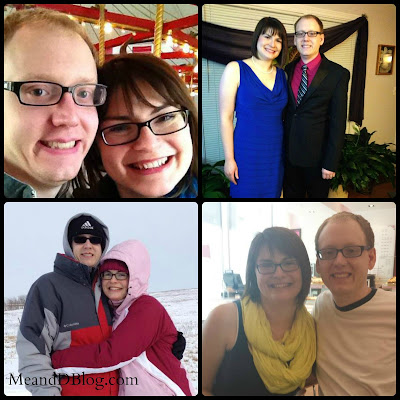 Happy anniversary to my best friend.